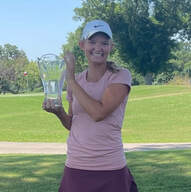 *Congratulations to McNeil golfer JORDAN DAVIS for winning the 2021 City of Austin Women's Golf Championship, played July 29-August 1 at Lions GC, Grey Rock GC, Jimmy Clay GC, and Morris Williams GC. Davis pulled away in the final round to earn a 10-shot victory and the title of Austin City Champion.  Fellow McNeil golfer SUJAE LEE also had an outstanding tournament with a 3rd place finish, while Maverick KENDALL WESTERVELT finished strong in 6th place overall- all three of these ladies were incredible representatives of McNeil during the Championship.

*Congratulations to McNeil golfer JORDAN DAVIS on her invitation to play in the PGA Champions Tour PURE Insurance Championship tournament at Pebble Beach Golf Resort in California in September.  Only 80 junior golfers from across the USA have been invited to play in this prestigious event, in which the junior player will be teammates with a professional player during the tournament.  The tournament will be shown worldwide on the Golf Channel Sept. 24-26.
​​ 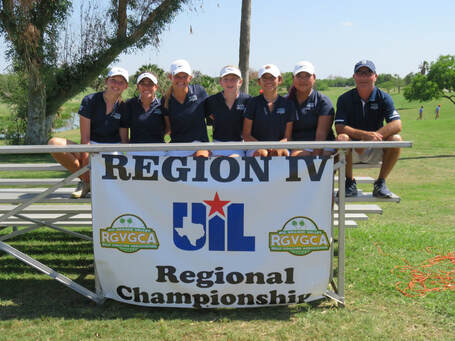 *Congratulations to McNeil golfers JORDAN DAVIS and SUJAE LEE, who have earned spots into the          2021 STPGA Junior Tour Championship, to be played at the Woodlands Country Club on Aug. 4-6.

*Congratulations to McNeil golfer ELIJAH LOZANO on his HOLE-IN-ONE on hole #17 at Forest Creek Golf Club, made while playing in the STPGA Junior Tour event there on June 30, 2021.  Lozano, along with Camden Anderson, Mireia Bustamante, Jordan Davis, Shreev Goyal, Nicola Kallenbach, Evan Koen, Sujae Lee, and Kendall Westervelt are all representing McNeil well in the STPGA Summer events.
​

*The Texas High School Coaches Association announced the 2021 Academic All-State Teams for Golf on May 6, and McNeil High School had 8 golfers awarded the designation of Academic All-State.  Congratulations to Allison Aleman, Kaylee Campbell, Nina Chong, Kate Hill, Jason Kendzior, Leah Loughran, Katie Lusby, and Franco Melhado for earning this prestigious award.  KAYLEE CAMPBELL was named to the ELITE TEAM (the highest possible status), which was awarded to only 11 girls from the entire state of Texas.  The Mavs, with 8 golfers earning Academic All-State, had the 2nd most honorees in the state (from over 1600 1A to 6A high schools in Texas).  Our McNeil golfers continue to do an outstanding job in the classroom and on the course.
2019-2020
Congratulations to JORDAN DAVIS (2022) on qualifying for the 2020 STPGA Junior TOUR CHAMPIONSHIP.
​Davis was the top point earner in the Austin area for the 2020 summer season, and she competed in the Tour Championship in the Woodlands August 5-6, where she finished in 8th place out of 27 competitors.
​The McNeil High School Golf Team is proud to announce that 7 Maverick senior golfers have been named to the 2019-2020 Texas High School Coaches Association / Texas Army National Guard Academic All-State Teams (awarded to senior nominees based upon GPA, class rank, and SAT/ACT scores).
Aidan Bradford, Arianna Hosek, Daeho Jang, Amanda Lewis, Alyssa Loughran, Abigail Powell, and Jason Schneider are the 7 Academic All-State golfers for MHS.
In addition, Arianna Hosek was named to the ELITE Team- which is the highest academic award, given to the top 10 girls in the state (from 2,813 public high schools in Texas, 1A-6A).
​Former McNeil golfer LEILANI McDANIEL (2016), who recently finished her career at Southwestern University as one of the most decorated players in school history, was named to the WGCA 2020 ACADEMIC ALL-AMERICAN TEAM for the 4th consecutive year.
2018-2019
​AUGUST 4, 2019:  CONGRATULATIONS to DIEGO COURTNEY (2019) and JORDAN DAVIS (2022) for earning qualifying spots into the 2019 STPGA JUNIOR TOUR CHAMPIONSHIP (August 7-8 at The Woodlands-Palmer Course).
DECEMBER 2018:  CONGRATULATIONS to Maverick golfers JASON KENDZIOR (2021) and FRANCO MELHADO (2021) for being chosen to represent Austin in the FIRST TEE NATIONAL GOLF TOURNAMENT, which was held December 14-16 at the Chateau Golf and Country Club in New Orleans, Louisiana.  Kendzior and Melhado helped lead the Austin team to a 3rd place finish out of 14 teams in the national field.
2017-2018
​AUGUST 2, 2018:  CONGRATULATIONS to Mavericks golfers DIEGO COURTNEY (2019), KATIE LUSBY (2021), and BEN REINHARDT (2019) for qualifying for the STPGA SUMMER CHAMPIONSHIP Tournament.  Courtney was the top point earner in the Austin section of 16-18 Boys for the Summer Series.

​JULY 5, 2018:  CONGRATULATIONS to former Maverick LEILANI McDANIEL (Sophomore, Southwestern University) for being named to the WGCA/NCAA ACADEMIC ALL-AMERICAN TEAM for 2018.  Leilani has earned Academic All-American status for each of her first two years at Southwestern.

​​MAY 15, 2018:  CONGRATULATIONS to freshman KATIE LUSBY for making her first HOLE-IN-ONE on the 103 yard par-3 9th hole at Balcones CC.  Katie hit a Pitching Wedge into the hole for her first Ace.
​
MAY 2018:  CONGRATULATIONS to seniors SAMANTHA BARUFALDI, CLAIRE BEAN, ALLY DORF, SAM HOSEK, MARGARET JACKS, SHARON MONAGAS, NICHOLAS PENA, and ALLISON YONKER for earning ACADEMIC ALL-STATE honors from the Texas High School Coaches Association.
​
​MARCH 2018:  CONGRATULATIONS to junior DIEGO COURTNEY for qualifying for the 2018 REGION II-6A CHAMPIONSHIP in Waco on April 25-26.  Courtney tied for 6th individually in the District 13-6A Championship to earn a spot in the Regional Tournament.